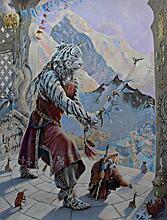 Spring is the first in a series of artworks celebrating the seasons and ceremonies surrounding them.

Nicola Bayley’s first book was published by Cape in 1975 and came about when her degree show at the Royal College of Art attracted the attention of Tom Maschler, after which her career flourished as both an illustrator and author. Her attention to detail and colour palette earned her a nomination for the Kate Greenaway Medal in 2001 for Katjie, the Windmill Cat and she won the British Book Award for the Illustrated Children's Book of the Year and British Design Production Award for The Mousehole Cat. 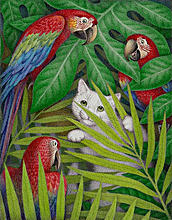 If you wish to send a photo or a longer email please email us at: